Here Comes the Pain (Known as Exciting Pro Wrestling 5 in Japan) is a video game released by WWE on the PlayStation 2 console by THQ on October 27, 2003. It is a sequel to WWE SmackDown! Shut Your Mouth and is part of the WWE SmackDown! Series based on World Wrestling Entertainment's weekly TV show SmackDown.

The fifth game in the SmackDown series, WWE SmackDown! Here Comes the Pain is regarded as one of the greatest wrestling games of all time! This was a game-changer in the world of wrestling games and it is a game that still holds up very well to this day. It is arguably the best of all the PlayStation 2 wrestling games!

The main single-player mode of this game is the Season Mode. Here you can pick any WWE Superstar on the roster or your own created character and try to take them to the top of the WWE. The game is really cool in that you have separate stats for your wrestler in Season Mode than you do in the other modes. So, if you picked, The Rock, for example, you can level him up and make him stronger.

Season Mode in WWE SmackDown! Here Comes the Pain gives you a lot of leeway in what you do. It loses the first-person point of view from the previous game and instead has you using menus to move around the locker room/backstage area. I get why they did this and it does streamline things, but I do wish they let us walk around like in SmackDown: Shut Your Mouth.

A New Way To Grapple

This game changed up the gameplay considerably. You now had a new grapple system that greatly expanded the number of moves a wrestler could now do. Add to this a new submission system and a body damage system and it is just mind-blowing how much they were able to change the core gameplay while keeping the feeling of the game the same. The grapple system adds a great deal of depth to the game, but it still moves at that quick and arcady pace that the series is known for.

A Game Of Many Firsts

As well as the new grapple system WWE SmackDown! Here Comes the Pain introduced a whole load of firsts for a WWE game. New match types The Elimination Chamber and the Bra & Panties match were included for the first time. Tons of new wrestlers were included with iconic stars such as John Cena and Batista making their debuts. This was also the first WWE game to make proper use of adding classic/legendary wrestlers to the game such as Sgt Slaughter and Rowdy Roddy Piper. The amount of new content they were able to add to this game is just staggering. 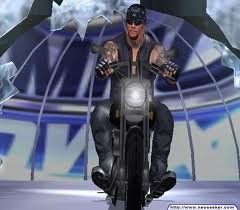 The more recent WWE games are a real mixed bag as far as the visuals go. That was not always the case and on the PlayStation 2, the first few games in the SmackDown series were known for their impressive visuals. Each wrestler has a full entrance, many have alternate attires and the arenas of which there are many all look just like they do on TV! From a looks point of view, this game is great!The only downside is the soundtrack. Yukes the people who made the WWE games always struggled with commentary and this game did away with it altogether. I do wish they had just a tad, maybe even if it was calling out just the big moves.

As you can tell, I freaking love WWE SmackDown! Here Comes the Pain and I still fire it up a few times each year to this day. If you are a wrestling fan you already know what a great game this is. For me, it is one of the top five wrestling games of all time and it is one of those games that if you have not played it for a while, you forget just how special and good this game is.

wwe smackdown pain game free download for android mobile apk
Click here to download
The whole process will just take a few moments.
If it happens that the download gets blocked by your browser or Chrome, know that this occurs because it's falsely detected as a virus.
This is why we highly recommend that you use Safari instead when downloading.
3 Oct 2017 How To Download WWE SmackDown Here's Comes The Pain Game On Android
For Free. With Gameplay Proof. This Is A PS2 To Play Because Of Low
Processor. So, Download Only If You Have A Good Mobile Phone.
31 May 2018 Here Comes The Pain In Android Phone. Game Information: WWE SmackDown!
Here Comes the Pain is a professional wrestling video game
2 Mar 2019 (65 mb) How to Download 'WWE SMACKDOWN PAIN' on android Emulator -
https://m.apkpure.com/go-psx-emulator. How to download wwe smackdown
pain on android, wwe pain android, smackdown here comes the pain game
How to download all your favourite ppsspp games in android for free
Do You Love SmackDown Pain PS2 game, this is the right app for you, This app
to win the game.
PC and PSP ANDROID GAMES Free Download : TNA Impact: Cross the Line
PSP Apk Download – Mod Apk Free Download For Android Mobile Games
Hack WWF Smackdown Here Comes Pain PS2 Playstation 2 game on sale in
great
16 Jun 2018 Here Comes The Pain. Today In This Video We Are Going To Tell You About
How To Download WWE SmackDown Pain In Android Phone.
15 Dec 2016 Download & Install WWE Smackdown Pain in Android 2017 !! to download and
play PSP games on your Android mobiles for free - Duration:
SmackDown wwe Here Comes The Pain Free Download ocean of games
Fortnite Full HD Phone Vertical Wallpaper : - Pubg, Fortnite and Hearthstone
Real Steel World Robot Boxing APK FREE Download - Android Apps APK
Download.
12 May 2020 So guys, Today hum bat karne bale he ki aap How To Play WWE Smack Pain
Game On Android Phone, me game ko play karna bhhot hi easy