There are a few things that you can count on to be consistent throughout the world of gaming. Mouse and keyboard setups will tend to be the most accurate for FPS games. Although the major consoles all have their own advantages/setbacks that balance them out, there will always be a constant ‘console war’ that extends past the end of time. And finally, Naruto games will be great in comparison to other games. Its almost uncanny how well the developers are able to understand the finer aspects of the Naruto manga and anime, being able to bring those feelings to each game produced. Of course, there are some not-so-great examples of Naruto games (common with any ‘great’ game series), but by and large Naruto has enjoyed great dedication from the developers behind each one. Naruto: The Broken Bond once again proves that this assumption can be taken seriously. Its got heart, knows the source material from episodes 81-135, and has a slightly different focus compared to other titles.

End of an Era

Given the current feeling towards companies like Ubisoft, its pleasant to say that this developer put a lot of effort into Broken Bond and even improved on many of the aspects they learned from its predecessor Naruto: Rise of a Ninja. In comparison to the Ultimate Ninja Storm series of games, which put a heavy emphasis on battles/crazy scenarios, Broken Bond instead shifts towards realism, speed, and navigability for the core of its gameplay. It even has some similarities to games like Spider-Man: Web of Shadows because of its fighting style/open world aspects and the challenges available to the player. It would not be constructive to say that it is the best Naruto game, but it can easily hold its own against other installments.

My personal favorite part of this game is that it ties together the basis of the Naruto series, has art direction that honors the original spirit of the series, and has some fantastic story elements. It has an amazing soundtrack, truly respectable voice acting, and uses the open world mechanics to the fullest without becoming a burden. Being the last title produced by Ubisoft, it ended on an incredibly high note that completely expanded on the ideas presented in Rise of the Ninja. 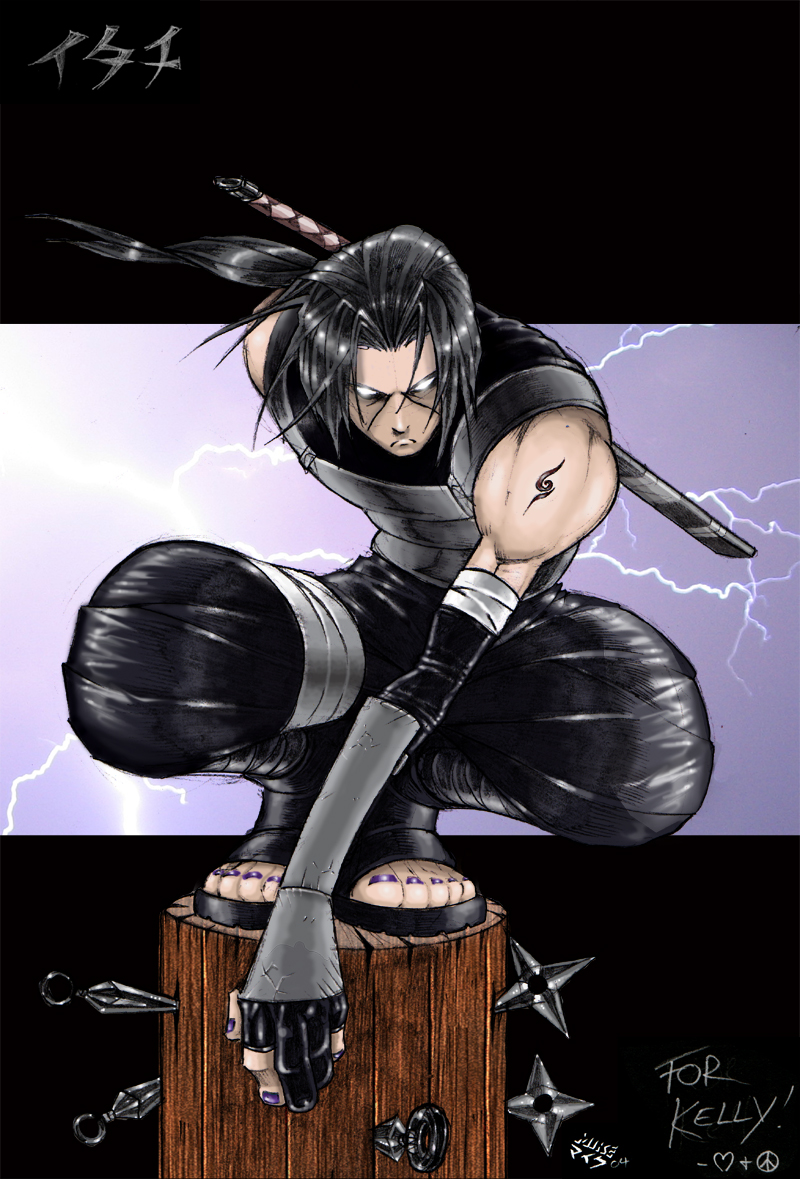 Naruto: Rise of a Ninja is a fighting role-playing video game for the Xbox 360, developed by Ubisoft Montreal, making it the first Naruto game to be developed by a non-Japanese company. The game is specifically based on the English dubbed version of the anime. The game was released in 2007.

Despite its greatest parts, Broken Bond was at its weakest when it came to the variety of side quests available, how minimally accessible it is to newcomers of the series, and its use of quick time events (QTEs). Side quests were just blatantly repetitive. After you’d done the first of one kind, you’ve essentially done them all and it quickly became a chore to do each one. Though this should be unsurprising, since it is a sequel, the chapters covered in this game pick up right in the middle of some story arcs.

Though it isn’t possible to pick up, it does make this one of the worst to pick up in terms of story coherence unless you’ve played the first. Finally, there’s nothing wrong with QTEs, but this game used them excessively. I didn’t hate it, but it took something away from the game that made it feel like it wasn’t wholly Naruto to me.

Another fantastic entry in the Naruto line of games that works well with the rest of the series and on its own. Its got a lot of memorable story pieces and a wonderfully designed world that will keep you coming back.

I enjoy all kinds of anime, from the sword and hip-hip fusion that is Samurai Champloo to the romantic comedies like Tenchi Muyo! Even with a palette as broad as mine I never bothered to even look at an episode of Naruto. I didn’t know what it was; something about kids going to ninja school just didn’t seem to fit in my current collection of Japanese anime, but after playing Naruto: Rise of a Ninja I really regret that decision.

Naruto: Rise of a Ninja is based on the first 80 episodes of the anime. You of course control young Naruto Usamaki who is a would be ninja. When you first meet Naruto you find out that the people of Leaf Village really despise him. This is explained in the first cut scene as to why they distrust him so; I won’t spoil it here just in case any of you are like me. It’s the last day of ninja school and Naruto has failed while everyone else has passed. As he is feeling bad for himself he gets tricked into stealing a “Jutsu” scroll. “Jutsu” is what the spectacular special moves these ninja can pull off are called. Upon doing this his master finds out and tries to save him before the guy who talked him into stealing it can get it. Of course his master gets wounded and young Naruto must rise to the challenge. He of course does, and in doing so proofs to his master that he does in fact have the talent to become the next Hakage. His master passes him and then the adventure begins.

The first thing you notice about this game, besides the truly awesome visuals. Is that the story is told by not only in game cut scenes but clips from the actually anime. I think this brings a sense of you actually playing through the anime, and it fills in gaps and does things that the normal game engine can’t. From what I have seen there are a lot of different Naruto games out there, but this one I think knocks them all away with a swift jump kick. Add in the fact that they have the voice actors from the anime (Japanese voice overs will be available for download soon, if you don’t like the English cast) some great sound effects, and a sound track that just won’t get out of my head (it’s a good thing!) you really have to give it up to Ubi Soft.

Naruto can easily be described as three games in one, on one hand you have a fighter, the other you have the platformer and finally you have an open world sandbox game. As I stated before Naruto is hated by this town, which you can plainly see with a big purple frowney face that hangs above ever persons head. As you go on missions that can range from finding someone’s purse, to finding some healing herbs you will turn those frowns upside down. The nice thing about making people happy is that when you are on missions where you have to track someone or something down you can ask those people for help and they will guide you in the right direction. If you ask a frowner they will growl at you to get away from them.

As you move about the village you will notice that some of your progress is blocked. This is because you have to learn the specific Jutsu to get past such barriers. Jutsu is performed by using “hand seals” For example; Naruto will have to use a Jutsu skill that concentrates his inner power (known as Chakra here) in order to climb vertical surfaces, which lead to locked parts of the world. Other Justus allow Naruto to walk on water, leap through the forest or even perform special fighting moves when faced with versus battles in the Story Mode.

The hand seals are done by a combination of the analog sticks, timing, and a rhythm. This was done on purpose by Ubisoft, just because a lot of the Jutsu are very powerful and can turn the tide of a fight very quickly, so you must master this technique just as Naruto had to master it in the anime. It can be frustrating at first, but with time and practice you will get it down with no problem.

After you have learned a bit of Jutsu its time for you to go out into the world and prove yourself. Goals in Naruto RoaN are split up in two categories. Missions are tasks that move along the story mode, while Quests are tasks the townspeople want you to do for them. It should also be noted that Missions are linked to your Chakra bar, which is a blue bar in the top of your H.U.D. Chakra is used to pull of your fancy ninja moves. While the Quests are linked to the yellow bar which is your health indicator. Training points during these tasks will also help to make Naruto a more powerful ninja in terms of fighting and platforming, as will pick-ups like coins (to buy new equipment), ramen (health replenishment), weapons and scrolls (ability power-ups).

The real fun in this game is of course the fighting. The combat system of Naruto: RoaN has been built from the ground up by Ubisoft, and it shows through its competence. The system is extremely challenging, but one that can be mastered as the user’s skill increases over time. The word “balance” comes to mind, as Ubisoft made sure that each and every character has a perfectly matched rival, not to mention an answer for any offensive or defensive attack available in the game.

The basic controls enable players to move freely around a 3-D battlefield, with the choice of dodging, jumping and blocking for both offensive-counter and defensive purposes Attacks come in two varieties: Vertical and Horizontal. Vertical attacks keep an enemy close, which automatically charges the Chakra meter. A charged Chakra meter means powerful Justus can be summoned, but the hand seals take some time to be pulled off correctly. Horizontal attacks are meant to move an opponent away from the user’s position, thus opening a window of time up so that a Jutsu can be attempted. With some practice and skill you will soon be hitting foes with the “Shadow Clone Jutsu” When you perform a Jutsu you are treated to some sort of button press. It is very interactive, it also allows for your opponent to be able to block the super attack (think DBZ Budokai 3 when you throw a Big Bang Attack with Vegeta and you have to rapidly press a button either to block it or make sure it is successful) The different characters all have different ways of completing their attacks and different attacks all together to choose from.

Fighting in Naruto: RoaN is such an important part of the game play that it has been given its own online modes. This allows players to battle CPU opponents, as well as local and remote humans in one-on-one combat. As an added treat, the game contains a “Forest of Death” ranked ladder tournament for those that are bored with going toe-to-toe in versus matches for Leader board bragging rights. It all works as advertised, too, and can add hours to the entire game.

The truly sad thing is that with November upon us and such triple A games like Call of Duty 4, Assassins Creed, Mass Effect, and Rock Band all on the way to your local game stores. Is that Naruto: RoaN is likely to go the way of Beyond Good and Evil. (If you have never played BG&E I suggest you go out and buy it now, as it is an excellent game) This as I said before is truly a shame because this is a very good game. Even if you are not a fan of the series like myself, you will have a lot of fun with Naruto: Rise of a Ninja.